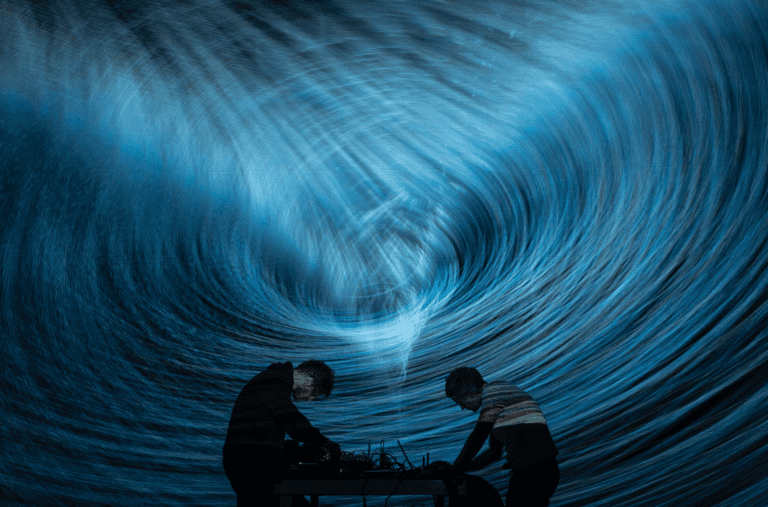 Videocittà dedicates the fifth edition of the Festival of Vision to the digital and ecological transition to change the interpretation of the relationship between human beings and the environment, going beyond the most well-known themes, such as global warming.

During Erratic Weather the relationship between art, science and technology in relation to the unpredictability and irregularity of the climate will be investigated.

This digital art project uses original tools that transform algorithms into images and 3D environments to create an immersive and interactive work. During its development, a system will use different sources of meteorological information retrieved from an online database whose data will then be processed in real time, to generate a unique visual and sound composition.

The public will be able to fully experience the life cycle of whirlwind phenomena such as: the typhoon, the hurricane and the tropical cyclone.

Erratic Weather is therefore a demonstration of the devastating power of nature, highlighting the urgent need to intervene on the climate change front.

French digital artist Mathieu Le Sourd (Maotik) focuses his work on the creation of immersive multimedia environments, interactive installations and audiovisual performances. His work has recently been featured in various festivals and galleries around the world.

Always looking for new challenges, Le Sourd designs its own audiovisual tools, to generate images with algorithms and create 3D worlds to transform perceptions of space. He collaborates with musicians, performers and scientists to continue his research on the relationship between art, science and technology.

Maotik recently moved his studio to Funkhaus, Berlin, participating in the art residency organized between Sonar + D and Factory Berlin.

Le Sourd has also joined CODE University where he works as a professor, lecturing on interactive design, generative design and AR / VR environments.

He is a Dutch cellist, composer and producer.

During his musical development Vos has explored in addition to traditional classical music a great interest in minimalist, contemporary and experimental music. He graduated with honors as a Master of Music from the Live Electronics department at the Amsterdam Conservatory.

He focuses his work on the creation of classical, ambient and modern electronic music.

Vos has also performed all over the world.